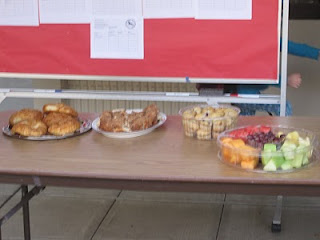 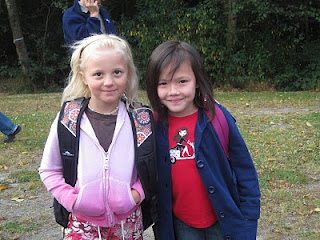 At our neighborhood tea party,
some of us Grandma's had talked about joining the young families on back to school day. When the other Grams were busy, I hesitated. Then I heard Komo reporter John Repp talking to some of the kids right up the street at Cherry Crest. I put on my funnest shoes and started out the door. Top of the driveway, I met up with two of the little girls I know, starting first grade, Emily and Ava, with their parents. So I joined them.

Cars are parked all down our street - just like 20 years ago. At the end of the block are the patrols, they look the same. The school still is the same outside and has the same sign out front.
But now they are serving coffee and pastry. And there is a sign up for after school Chess. School started way earlier this year. There are Grandparents bringing their grandkids. That did not happen 20 years ago. But the biggest difference is the huge bags that moms and dads are carrying with crackers, handiwipes, Kleenex, etc. One lady was carrying two Gap bags and two grocery bags. The two boys beside her were carrying back pack. On the way home I saw a Dad on a bicycle built for two. That is new.
And here come late arrivers. running in their new Nike's - now that has not changed.
Posted by justbenme at 9:22 PM